Landlords in New York City can afford to be picky. With a vacancy rate in Manhattan of under 1 percent, apartments sometimes rent in hours, not days or weeks. Good tenants are not that hard to find. On top of that, evicting problem tenants can be expensive and time consuming.

So, most landlords here require a lot of information. They want to see a prospective tenant’s tax returns, pay stubs, bank statements, proof of employment, photo identification, and sometimes, reference letters from previous landlords. Everyone will run a credit check (many Manhattan landlords look for a score above 700) and just about all, from big management firms to small-time landlords, want to know that your gross income is somewhere between 40 and 50 times the monthly rent.

“It mirrors the requirements used to qualify you for a mortgage,” said Scott Walsh, the director of market research at TF Cornerstone, a property management and construction firm in Manhattan. 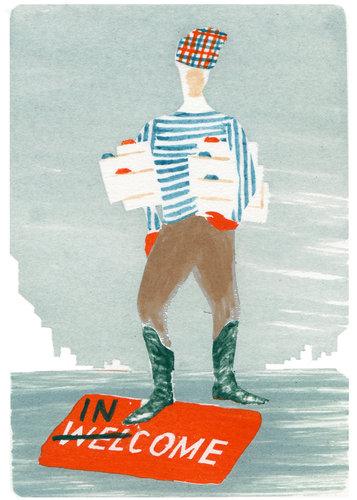 Apartment hunters should be ready to produce all of these documents. And, said Steve Maschi, a vice president of Glenwood, a Manhattan property management firm, prospective tenants should be ready to write a check on the spot for the first month’s rent, the security deposit (usually a month’s rent) and if a broker is involved, that fee (8 to 15 percent of a year’s rent).

Those who lack the required income or credit score, or those relocating here from overseas, may be shut out.

One recent apartment hunter, Sara Davar, said she was shocked when she ran into these hurdles. Ms. Davar, 28, an area director for Meltwater Buzz, which provides analytic tools for social media, had lived in her native Stockholm, as well as in London and in Philadelphia, and had not encountered anything like the requirements here. The stumbling block for her was the same as that encountered by most foreigners: no credit history in this country. Without it, no landlord would consider her.

In other cities, her company was able to sign the lease on her behalf, she said. But in New York, landlords generally do not want companies on the lease because they lack the resources to determine the company’s suitability to sign the lease, and feel that an individual is more likely to take the responsibility of paying the rent, Mr. Walsh said.

Many people in this situation turn to a guarantor, usually a parent, to co-sign the lease. But that is not always a simple solution. Landlords subject guarantors to the same in-depth scrutiny that they give tenants, a searchlight at which parents often balk. In addition, they want to see income of anywhere from 70 to 100 times the rent, since guarantors are presumably paying for their own homes as well. Some management firms approve only guarantors who live in New York or in the tristate area, said Jeremy Cooper, a founder of Cooper & Cooper, a real estate firm in Manhattan. So, for those arriving from overseas, or even the opposite side of the country, a guarantor will not always help.

When there are credit issues, some landlords will accept an additional security deposit, or several months’ rent upfront. Landlords of apartments subject to rent regulation laws are not allowed to accept this extra payment.

If there are problems with credit, prospective tenants should include a note of explanation, Mr. Maschi of Glenwood said. Exceptions can always be made, and some firms are better than others at delving into the details of a credit report, or balancing unpaid bills against income or savings. “We consider everything,” he said. “People lead complex lives.”

Ms. Davar was able to secure a lease, at the new Frank Gehry building on Spruce Street, by using a company called Insurent that insures leases. For a fee (between 75 and 85 percent of a month’s rent and up to 110 percent of a month’s rent for foreigners) the company will cover your rent if you stop paying it, provided the landlord obtains a judgment against you. The company will then pursue you for reimbursement.

Insurent’s standards are much lower than those of most city landlords — it requires a gross income of only 27.5 times one month’s rent and will work with credit scores as low as 630.

But not all of the city’s management companies and landlords will accept the insurance.

Ms. Davar moved into the apartment in May. “I really enjoy it,” she said, but added that explaining to her company why it had to pay an additional fee took a bit of work.

Rental standards outside of Manhattan and certain hot parts of Brooklyn are more relaxed. Owners of smaller properties in Astoria, Queens, for example, may be more flexible, said Peter Horowitz, a broker at My Astoria Real Estate. Landlords there look for credit scores above 650, he said. Tammy Shaw, the owner of TB Shaw Realty Associates in Park Slope, said apartment hunters with credit issues or trouble with income requirements might look to other Brooklyn neighborhoods, like Ditmas Park or Kensington. She said rents and demand there are lower than in Park Slope, where landlords look for credit scores above 700.

Another option is an apartment in an owner-occupied town house. Often these landlords weigh compatibility as strongly as they do credit scores or income, Ms. Shaw said.

He rented the unit to two students at Pratt Institute. Though they were screened by a real estate agent, Mr. Celi said that his opinion of them was more important than any paperwork. “We met the parents and got a feel for the family,” he said. “My kids liked them.”

The tenants now baby-sit for Mr. Celi’s children and are close to the family. He likes them so much he hasn’t raised their rent in two years.
Story By JIM RENDON for NYTimes